Are you looking for a program that can help you merge mp3s into one? You’ve landed in the right place! There are many audio players that claim to support it, but nothing beats joining the tracks in question into one large MP3 file that will surely not have any gaps between the tracks! Now you can listen to your favorite album, fully gap-less or join your favorite audio book into one, forever eliminating the problem of hunting for the next chapter. Just download “Merge MP3″ – a multi-functional yet easy-to-use song merger that can help you with a wide range of different audio formats and combining two or more .mp3 files into one. Look no further – “Merge MP3″ is just the piece of software you have been looking for! No confusing menus, no tricky timelines, no fancy technical terms – just drag’n'drop your favorite compositions from Windows Explorer into the program window or add them through the program dialog, arrange them in the desired order and press the “Merge” button. The resulting track will be ready in a wink of an eye! Boasting a multi-language interface, an intuitive interface and an ID3v1 and ID3v2 tag editor, the program is perfectly functional and does its job very well – all that at a very affordable price! The program supports MP3, WMA and WAV sound tracks over 2 GB in size and lets you listen to your sound tracks from within the application using the built-in player. “Merging MP3″ helps you join multiple tracks or parts of multiple files into one bigger file. This Audio Joiner has the ability to merge mp3 songs with fast speed without re-compression or quality loss and ability to handle large size data. It converts tracks among MPEG-1 Layer-3, WAV, WMA and OGG as an audio converter and provides convenient presets and parameters adjustment for you to customize the detailed parameters for each format. You can drag-and-drop simplicity to move or add files easily and join directly without costing any other disk space. By the simple interface, you can easily add or delete files to be merged& converted. On-the-fly merging, no temporary file generated and very ease to use!

Step 1: Add MP3 files you want to join to Audio Merger – simply drag and drop sound tracks to the main interface of the program.
Tips: Drag and drop the folder where the MP3 files are to Audio Joiner, if you don’t want to add tracks one by one. Note that these files are arranged according to the play order. So if you need to exchange the location of two MP3′s, just free drag them to your wanted position.

Step 4: To join you files Simply click big “Merge!” button on the lower right corner of the program to join media files into one in a flash. 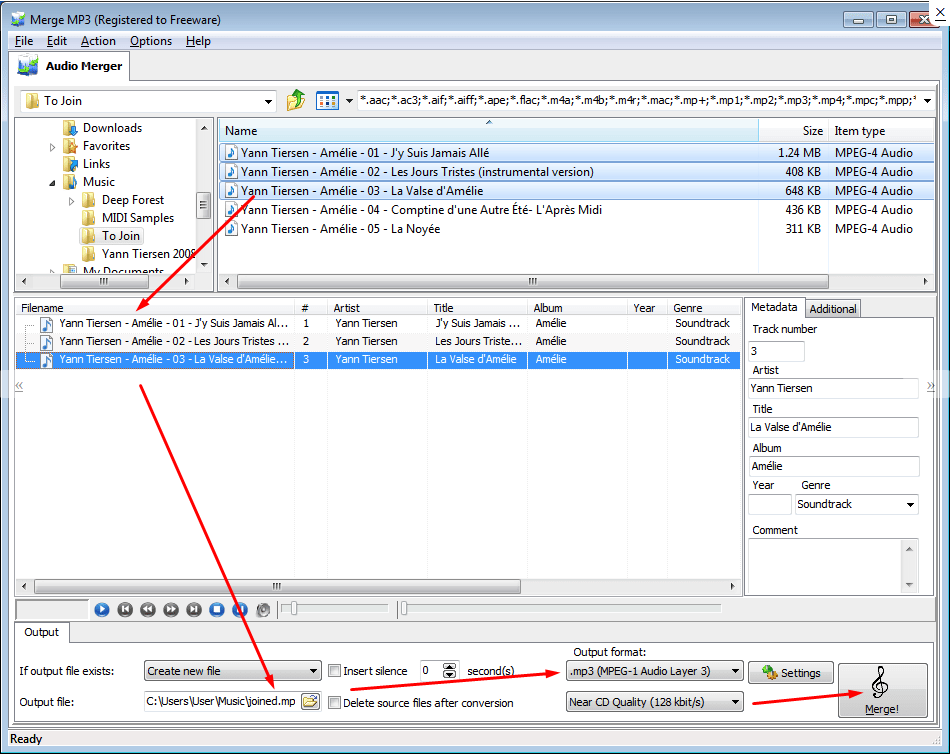 To satisfy the needs of customers, here, we mainly introduce an efficient and reliable MP3 Merger for you. This merging software is pretty simple to use and what you need to do is just three steps so that people who have no specialized knowledge can handle it effortlessly. “Merge MP3″ is also perfect for professionals because it has advanced settings which can fulfill the requirement of optimizing MPEG-1 Layer-3 files. It can join mp3 files without re-encoding, or join media clips as well as convert any track to other audio formats like wav, aac, m4a, ac3, wma, mp4, aiff, flac, etc. This MP3 Merger is the simplest and easiest to use mp3 joiner and song merger you can find. You can join multiple .mp3 files into one continuous file because Mp3 merger concatenates and combines mp3 audio files from end to end to play sequentially. You may use audio merger to put all your favorite audio files as a single file. This may be useful in creating a playlist for media players that don’t support sequential play of tracks. You may use merger to combine small mp3 files into one file for storage convenience. There are many reasons to use “Merge MP3″ and it’s all up to you. With this tool you can easily combine mp3’s into a single aac, ape, flac, m4a, m4b, mp4, ogg, wav or wma file. In fact, your source tracks don’t even have to be MP3’s – with software you can join aac, ape, flac, m4a, m4b, mp4, ogg, wav and wma tracks together just as easily! Our software is suitable for creating long audio mixes, for uninterrupted play time, instead of composing a playlist, for instance.

Some CDs like medleys and remixes have no pauses between the tracks, featuring continuous, uninterrupted playback. When using this Joiner to combine .mp3 files, you can opt for gapless playback by specifying zero-length pauses.

Merger can be used for a wide range of purposes. You can join two .mp3 files together in a number of formats or join short mp3 files captured by a voice recorder. If you used the recorder to record lectures, you can merge mp3 files into one to cover the entire recording out of the many different fragments. Finally, you may just want to reduce file clutter and join sound tracks in a variety of formats together into a single super-mix.

Support of Most Audio Formats